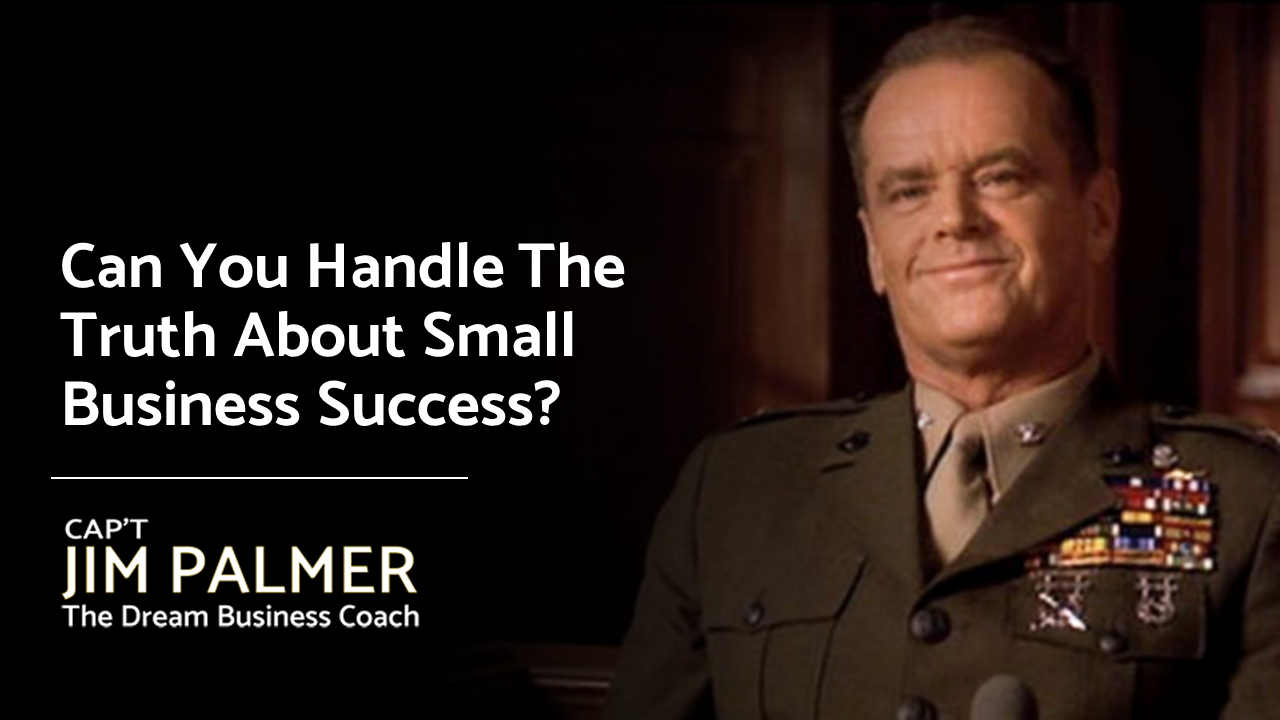 Early on in my entrepreneurial journey, while I was more than determined to be successful, I was also determined to do it my way.

Let’s face it, I was finally the boss, the man, the founder, CEO, President and ‘top dog’ of my own company!

Nobody was going to make me do things that I did not want to do.

As I was growing my business, far too slowly in my opinion, I would often see other entrepreneurs enjoying more success, seemingly growing by leaps and bounds.

The visual is that these folks were whizzing up the passing lane – while I was in the more crowded right lane of the small business highway.

Again, it was my business and I wanted do it my way and operate within my comfort zone.

But after too many months of “slow to no growth” I was ready to stop being the “know-it-all” and start listening to some smarter folks!

And when I became open and ready to receive, I received some hard truth that forever changed the direction of my business.

My moment of truth came when someone I had a great deal of respect for, someone who had achieved a high level of success, and by all accounts had the business and lifestyle that I wanted, asked me a very direct question.

It was incredibly difficult to hear, and I know I felt embarrassed at the time.

As I remember that meeting several years later, I still feel the burn!

However, I am beyond grateful for the tough love, the incredible truth bomb I received because without it, I might still be in the crowded right lane where the vast majority of small business owners are all complaining about slow to no growth.

So what was this hard truth that began to turn my attitude and business around?

It was a seemingly simple question but cut right to the core of my mediocrity as an entrepreneur, and I’ll share it with you now.

“Jim, what makes you think you’re entitled to the same level of success as those entrepreneurs you admire and even emulate, yet you are not willing to do the same things that they do to market and grow their businesses?”

There was no hiding from the truth of my mediocrity. I was the roadblock and chief excuse maker.

You see, for too long, I relished the feeling that as a business owner, nobody would ever again tell me what I had to do or when to do it.

And as my own boss, nobody would make me do some of the things that I hated or at least was uncomfortable doing.

But this mentor’s “truth bomb” blew apart my facade and cut right to the core of my problem.

The only truthful answer was that if I wanted to grow my business by leaps and bounds and achieve similar levels of success, then I needed to stop being the impediment to my own growth.

I needed to step up and start acting and – more importantly, start performing like – the successful businessman that the fancy title on my glossy business card indicated.

So where do you stand in your entrepreneurial journey?

If the answer to any of these question is YES, then I want to suggest you do one thing today, perhaps right now at this very moment.

Quickly, while you’re feeling a little uncomfortable with the truth bomb that I shared, go to the nearest mirror, look at the person in the reflection, and ask:

“Why are you holding me back?”

“Why are you not investing in the future business and lifestyle that you seemingly want so badly?

“When will you be ready to push the chips in to the middle of the table and bet on yourself to win big?”

My guess is – and get ready for some more hard truth – is that until the pain is great enough (think “thorn in lion’s paw”) you won’t make any real changes in the way you’re running your business today.

I mean, all the things.

Investing money you don’t have is hard when there are no guarantees it will work.

Speaking in front of a group of people is hard.

Putting yourself “out there” in videos for all the world to see is hard.

Writing a book for the super-critical English majors who will find you and criticize your bad grammar is hard (it’s a little less hard when you realize that those that are criticizing you are not your customers!)

It’s hard to let thousands of people see who you really are; the good, the bad, and even the silly voice, middle-age paunch, bad hairline, ugly glasses, whatever – it’s all hard!

Doing a podcast and interviewing other business owners who you hold in high regard without your voice cracking is hard – or appearing star struck is hard.

(Imagine how I felt when I did THIS interview.)

Honestly, you should be glad some of these things are hard.

If they weren’t difficult, the stats would be reversed.

Instead of 80% of new businesses failing, 80% would succeed and you’d have a lot more competition, and it would be even more difficult to stand out and build your Dream Business and live your dream lifestyle!

The truth is, the top 1% exists for a reason.

The top 1% refers to the small fraction of all entrepreneurs and small business owners who:

And by the way, simply being better at what you do is not enough.

The top 1% is not a crowded field because it is hard to get there, and maybe just a little less hard to stay there.

Continuing with the top 1% analogy:

So where do you want to be, in the 99% of small business owners that achieve modest levels of success, but likely struggle month to month looking for their next new customer, client, or patient? (There’s nothing wrong with that if that’s where you want to be. Not for me to judge.)

Or, are you ready to create a Dream Business and have that business provide the lifestyle that you want and deserve?

I’ll end this longer than expected post by asking you the same question I was asked – the hard truth that forever changed the course of my business:

“(insert your name here), what makes you think you’re entitled to the same level of success as those entrepreneurs you admire and even emulate, yet you are not willing to do the same things that they do to market and grow their businesses?”

Make some hard decisions and get into swift and constant action.

If you’re ready to experience growth and higher levels of success in your business, I invite you to check out and apply for membership in my Dream Business Mastermind and Coaching Program.