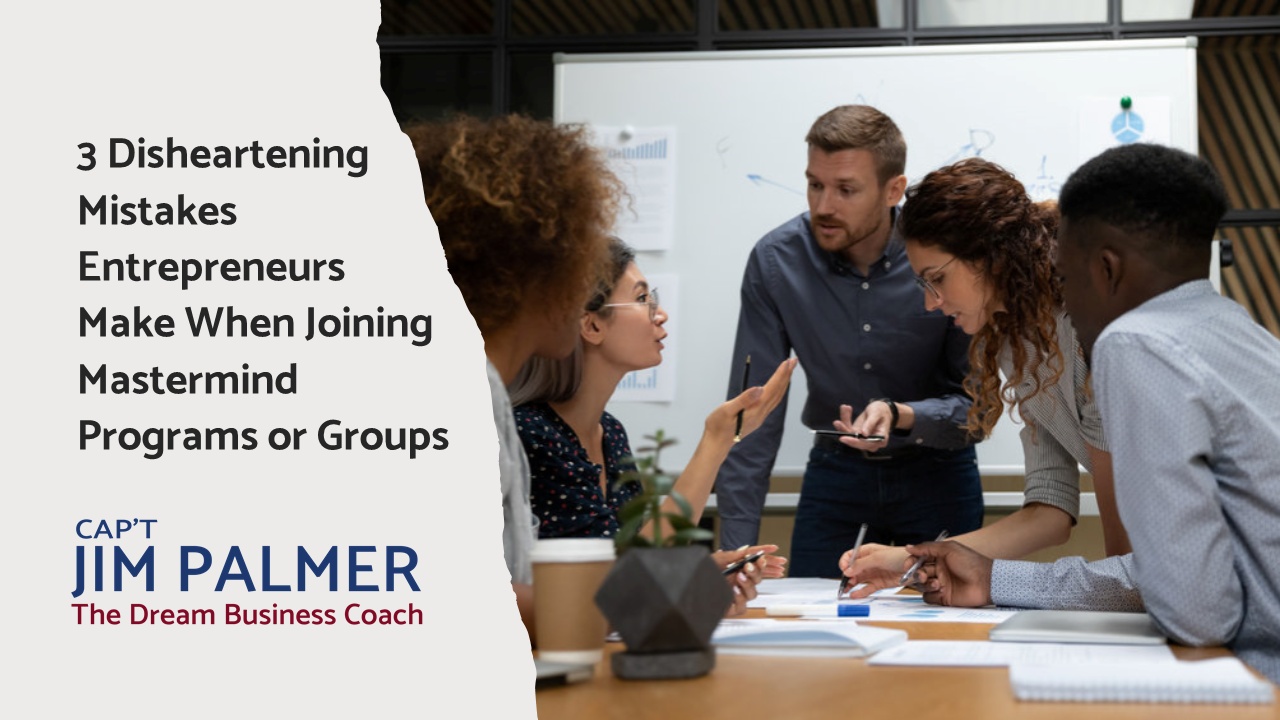 Most Dream Business entrepreneurs belong to at least one mastermind program or group.

Some belong to two or three different programs/groups at the same time – nothing wrong with that, actually, and some of my own members belong to multiple groups as well.

Many of these same entrepreneurs simultaneously manage and run their own mastermind programs or groups, like this guy for example.

Since 2009, I’ve had the Dream Business Mastermind and Coaching Program – it’s had a few name changes, such as the “Stop Waiting Mastermind” and at one point, simply, “The Jim Palmer Mastermind” – but it’s been the same, ever-growing and ever-evolving program all along.

Along the way, as part of my work helping lots and lots of people over many years, I’ve belonged to a few masterminds myself.

You could say I’ve seen pretty much everything, including three disheartening mistakes entrepreneurs make when joining these mastermind programs or groups.

Some entrepreneurs are so brazen as to obtain lists of a mastermind group’s members and make their decision to join based on how many existing members they see as potential clients for themselves.

Once they get in the group, they hijack their own “hot seats” on the mastermind calls to use them as commercials for their own business, then pigeonhole the other members with sales pitches.

What to do instead: remember that the Mastermind group is what the group owner uses to get themselves clients. Build relationships with your fellow group members, for it is more likely their friends outside the group will be your actual prospects when your fellow members get asked “Who do you know that does X?”

Disheartening Mistake #2: Only Showing Up When They Need Help for Themselves

Unfortunately, too many mastermind programs have their share of members who only attend group calls when they want to ask a question or want their own “hot seat” (in my program, we call these Profit Seats).

Not only that, but it feels like they can’t be troubled to chip in to help others on group calls or in the discussion forum, unless the other person is saying “I want to hire you.”

What to do instead: embrace the Serve First philosophy and lead by helping your fellow mastermind members. Create geniune friendships, remembering that people invest in people, not services, over time.

Disheartening Mistake #3: Sucking Every Cubic Inch of Oxygen Out of the Room

Have you ever been in a meeting where it seems like the same person constantly asks questions to which everyone already knows the answer? Takes 13 minutes to explain how they have “nothing else to add”? Leaps into every single discussion point and leaps ahead while others are clearing their throats preparing to contribute?

When you play back the session recording, you keep seeing that one person’s face in the video and hearing just their voice in the audio – as if they’re the only person in the room!

What to do instead: measure your words and speak with impact. If you agree 100% but have nothing else to add, just say “I agree 100%” to support the person you agree with. Allow other members of the group to have their moment in the sun, and they will gleefully bask in your glow when it’s your turn.

This is a bonus tip you can use if you’re running your own mastermind, and something you can bring up if it feels like the group you belong to is unruly and dominated by the loudest voices.

Most audio and video conferencing services have a feature that allows attendees to “raise their hand” or “queue”.

I implemented this in my own group several years ago, and it did wonders for making all my members feel heard and valued.

As someone who sees the power of mastermind programs and groups, I have helped several of my own VIPs start their own lucrative virtual masterminds.

Should you find yourself interested in paying it forward this way, let’s talk about it!